The Torre Bonança was probably part of the group of towers which were guarded by Jerome Arrufat, judge of King Philip II on matters related to the defensive towers of the Cropland in 1553. This information would allow us to date its construction in the sixteenth century. The tower has a square and sloping base, with prismatic arrangement and three floors. As in most cases the house is leaning against two of its four sides.

The Pascual de Bonanza family belonged to the long lineage of the Pascual family, from the Valle de Zarate in the Lordship of Biscay. They settled in Alacant in times of the Christian conquest. The Pascual family was closely linked to the monarchs, especially to King James I, with whom they maintained close relations. Several branches of the family appear among the descendants who became bonded to Alacant’s Horta (cropland) as the Pobil, de la Verónica or Ibarra. In the branch of Pascual de Bonanza some personalities stand out. For example, Tomás Pascual de Bonanza y Martinez, illustrious soldier nicknamed “the Mayor”, who was a magistrate in Alacant between 1555 and 1556, and also an assistant to the courts of Monzón. Most family members held important positions in the city and the kingdom. Many were born in Sant Joan and baptized in our parish church, like José Mariano Jaime Pascual del Pobil y Estellés (1819-1852) or Luis Pascual del Pobil y Martos (1851-1911).

Regarding the building, the dwelling has undergone several transformations over its history. In the mid-twentieth century, the tower underwent some works that altered its original morphology. Its walls were plastered in an unfortunate way, some hollows were opened and a little roof was built. But fortunately a recent architectural intervention brought the building to its original appearance, removing the roof, trying to recover the original tonality of the facade and exposing the dressed stone and part of the building’s masonry. The finishing on the tower reminds of the crenellated disposition of the towers.

The house is surrounded by several citrus croplands accompanied by pines, cypresses, monkey-puzzle trees, carob trees, yuccas and palm trees, respecting the character that the farm may have had in the past. Fortunately the Pascual de Bonanza family continues to inhabit this dwelling, which has kept the complex in an impeccable state of preservation. If we continue down the camí (path) de Sereni we will find the neighboring Salafranca tower nearby. 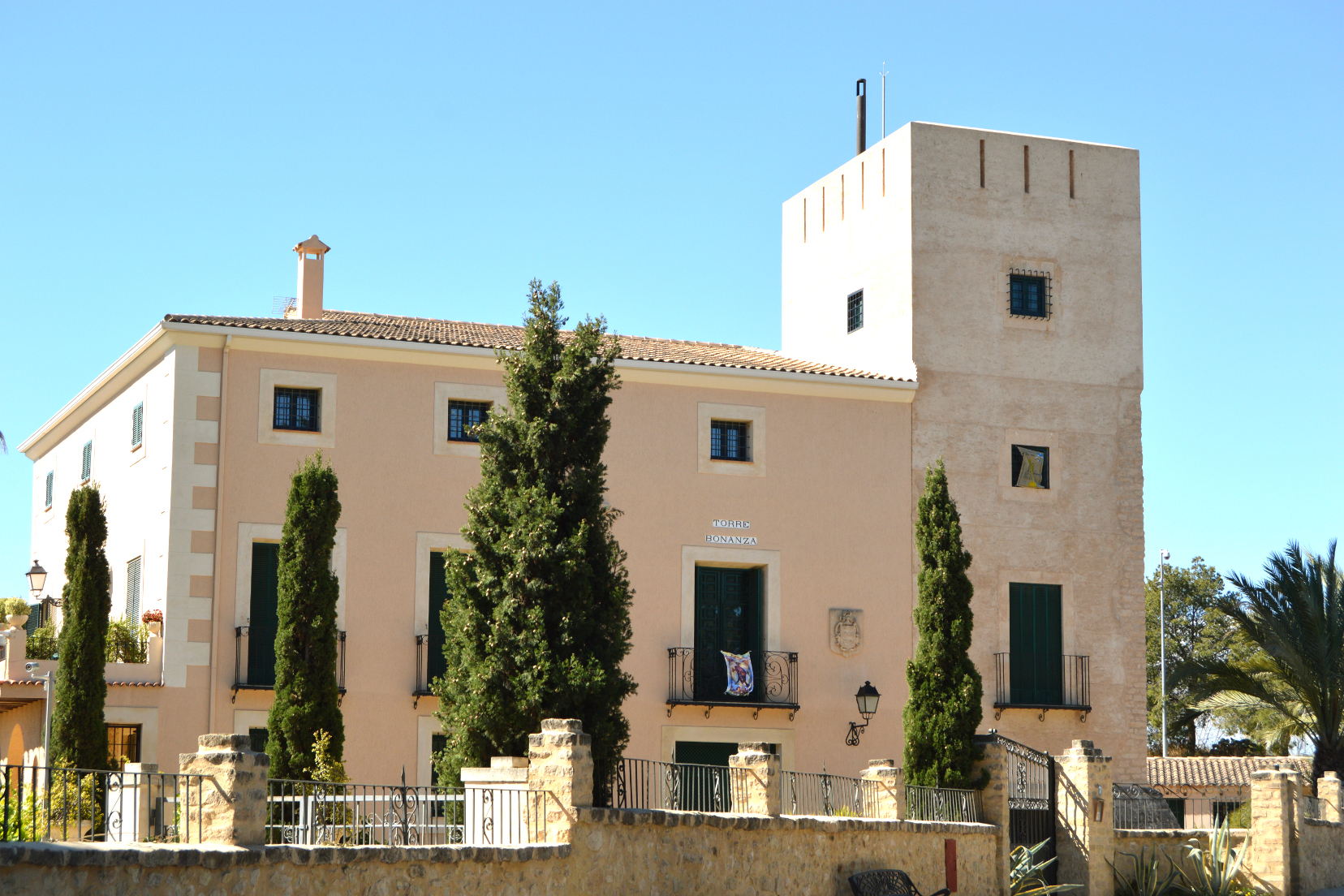 The coat of arms of this family has a lamb walking in a green field. The lamb is carrying a white flag with a cross that is reminiscent of Montesa’s cross. The pole of the cross rests on a fountain from which a water pipe with a golden border emerges. Around the emblem we can read “Sub cuius pede fons emanat live” written in blue letters. This shield later became more complex, divided into four parts. Two banners alternate repeatedly to form the quarters. One is the original blazon with the lamb and the other is an emblem with two castles and towers of gold under a golden star. Interestingly the coat of arms of Sant Joan is reminiscent of the Pascual family as there is a lamb in it carrying the cross with the inscription “Agnus Dei”, which refers to John the Baptist.

Another curiosity has to do with the family branch of the Pobil. During the second half of the eighteenth century Juan Pascual de Pobil y Rovira married his daughter Tomasa Pascual de Pobil y Sannazar with Count Lumiares. The couple lived on the farm called La Princesa, also known as the Jardí del Príncep Pío.

But without a doubt one of the most famous family members was Guillem Pascual de la Veronica, for his active involvement in the miracle of the Holy Face(Santa fan). The miracle took place not too far from this tower in 1489. A few years earlier a priest from Sant Joan, priest Pedro Mena, had brought from Rome one of the three alleged folds of the Veil of Veronica with which she had wiped the face of Christ on his way to Golgotha in Jerusalem. After keeping it at the bottom of a chest, he watched as the veil miraculously unfolded on the top of it. Apparently this phenomenon occurred repeatedly, so it was decided to expose the veil for worship and to organize a rogation to Alacant.

Such acts were common at that time, mainly to pray for rain. Tradition has it that on 17 March tears streamed from one eye of the relic while passing through the ravine Juncaret. It was then when Guillem Pascual checked the veracity of the tears, dismissing the possibility of an illusion. After the event it rained and the Church recognized the miracle. It was decided to build a monastery in that place coinciding with thanksgiving, which was left under the jurisdiction of the parish of Sant Joan. From there, Guillem Pascual always wore a silver thimble on that finger, and gave the land for the construction of the monastery of Santa Faç, adding the name “de la Verónica” to his noble name Pascual.